The 19th Ordinary Meeting of the 165th Session of the Literific took place on the 20th of March in the Senate Room.

Vincent Wooding, Jack Thompson and Naomh Gibson spoke in proposition. Wooding argued that it is unfair to trust a person to do things within society but not allow them the ability to choose how they die. Thompson explained active and passive euthanasia to the House and that dying is a phase. He said that doctors have become good at extending the dying phase which is not in the best interests of the patient. Gibson question how learned the proposition were. Instead of worrying about the required model she asked the House to concentrate on the right to control the last part of your life when so much is out of your hands.

Sammy Wade, Nathan Cantley and Nathan Anderson opposed the motion. Wade argued that it would undermine the basic function of the legal and health authorities which exist to protect life. Cantley said that society is confused about the right to die, that there are no guidelines and no framework for us to be able to support it. Anderson said that everyone has their own perspectives on it but that he believed vulnerable people should be given the best possible care as opposed to the right to die.

The floor debate ensued, summaries were heard and after a vote the motion passed. 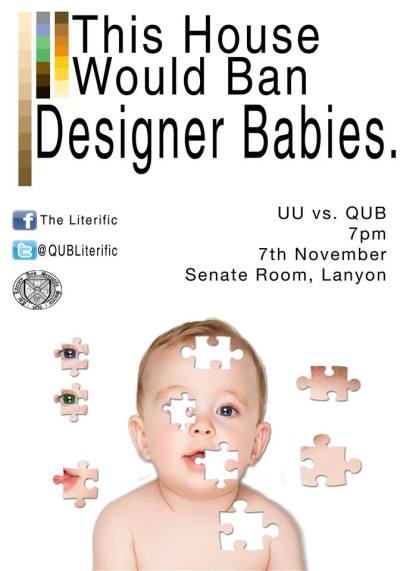 The 6th Ordinary Meeting of the 165th session of the Literific took place on the 7th of November in the Senate Room. We were joined by the University of Ulster for a war between universities!

Professor McClure ‘set the scene’ by explaining a bit about genetics. There was a little bit of UU hating.

Representing QUB on proposition were Patrick Mallon, Aisha Sobey, Nathan Cantley and James McAlister. Mallon urged the House to embrace natural differences as designer babies would doom our society. Sobey went on to explain that designer babies would only be an option for the rich, resulting in an elite ruling class. Nathan Cantley asked the House how far? He explained that since many genetic disorders are connected to the environment it would not be possible to fully get rid of genetic disorders. McAlister commented that these designer babies would either suffer from low self-esteem or would have a false sense of superiority, e.g. a generation of douchebags.

Representing University of Ulster on opposition were Greene, Catterson, Thomas and Smyth (first names have…disappeared, sorry!) Greene spoke of the advantages of legalising it for medical uses for carriers of a disease who may choose not to have children for fear of passing it on. Catterson talked of our right to freedom and that we could not force a decision on a parent. Thomas highlighted the need for genetic engineering for medical use as it would be a great tool to prevent future suffering. Smyth explained that genetic engineering could remove some of the strain on the NHS in the future and would also prevent pain and suffering.

We then got to hear from Professor McClure again who was really kind of mean to everyone, it was beautiful and sassy. The motion then went to a vote and passed 34 to 32.