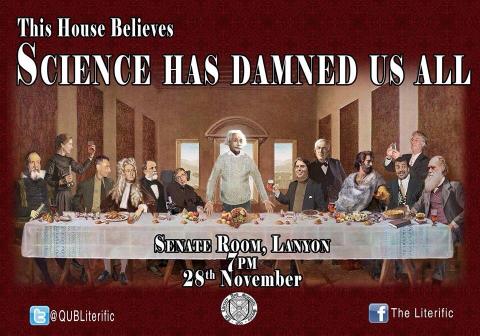 The 9th Ordinary meeting of the 165th session of the Literary and Scientific society took place on the 28th of November in the Senate Room.

Matthew Allen, Dr. Stephen Goss and James McAlister proposed the motion. Allen opened the debate with a very interesting account of past philosophers and anthropologists (I think). He ended by reading a lovely poem to the House in its native Swedish. Yes. Goss brought up scientific theories that have been widely accepted but which have since been disproven and asked if it was worthwhile condemning ourselves for this. James McAlister compared our society’s way of life to that of the Amish who follow the bible for guidance and concluded that we will inevitably be damned by our advancements. However, he also said that we should just roll with it and be damned.

Fionnbharr Rodgers, Nick Millington and Dr David Timson opposed the debate. Fionn advised the House to ignore the extremists who create conflict as they are not a fair representation of either side. Mr Millington argued that heaven, the option other than being damned, has been raised in people’s minds but that in reality it may not be so wonderful. Dr Timson, our guest, said that science is good, that it has enhanced our lives in many ways; he argued that if science has damned us then God help the Vatican who sponsor science.

The debate then went to the floor.
Both sides summarised, the proposition in Swedish and we went to a vote. The motion was defeated.